Panda shortly after the ordeal!

I went off to Conjectureyesterday and came back to discover something HORRIFIC. I had crated the Corgis, Panda and Tater, because our house is torn up from flood damage. Image my terror when I discovered that the CRATES were torn up and my Corgis were NOWHERE TO BE FOUND! And I heard a ton of growling. I figured they had cornered something and started calling their names.

Imagine my double terror when instead of two little Corgis running at me, a pack of ZOMBIES lumbered at me with slathering, rabid-looking jaws a-clackin’!  I started screaming. Then I realized that if the Corgis had bitten them, they had become Zombicorgis. A FATE WORSE THAN DEATH!

So I stopped screaming and found the dogs’ retractable leashes. Using them like bolos, I swung them around my head and lassoed the zombies around their necks. Then I started leading them toward the front door, and I saw my two intrepid herding dogs coming up behind them.

My dogs have both been to obedience school. Panda, in fact, is a Canine Good Citizen and Tater was a Star Puppy. So despite their agitation–I, their beloved, might be in trouble!–they did as I said. That’ll do, Corgis. That’ll do!

As you may know, zombies don’t move very fast. I lead them out the front door and over to the slope that leads down to the street. I feinted going down the slope. They followed…and wobbled. And fell off balance! 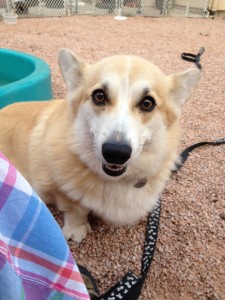 As they tumbled down the incline, I raced back into the house. The Corgis had obediently waited for me. I slammed the door shut and examined them.

It’s been twelve hours since then, and they are unchanged. We’re all back together and I have suitably rewarded my two Corgibabies with chicken flips and lots of cuddles. And that’s the report from San Diego!

For more Zombie Apocalypse information, tune in to

This entry was posted on Sunday, October 7th, 2012 at 2:27 pm. You can follow any responses to this entry through the RSS 2.0 feed. Both comments and pings are currently closed.