Thank you for participating. The YA Scavenger Hunt is now closed.

I am Nancy Holder,

and this is a blog stop for Team Yellow.

Welcome to YA Scavenger Hunt! This tri-annual event was first organized by author Colleen Houck to give readers a chance to gain access to exclusive bonus material from their favorite authors…and a chance to win some awesome prizes!

On this hunt, you get access to exclusive content from each author and you’ll find clues to solve each team’s puzzle–one lucky winner will receive TWENTY signed books! But play fast: this contest (and all the exclusive bonus material) will only be online for 72 hours!

Go to the YA Scavenger Hunt page for more information about the hunt. There are THREE contests happening simultaneously, and you can enter all three! I am a part of  TEAM YELLOW–but there is also a red team and a blue team. Remember, you can enter all three contests–which have a combined total prize bucket of SIXTY signed books!

Directions: Hidden within my post is a single letter that is YELLOW. Make a note of that letter! It’s a part of a scrambled phrase. When you go to each of the author sites for the yellow team, you’ll have all the letters you need to solve our team’s puzzle and enter the contest.

Entry Form: Once you piece together all the clues to the hunt, complete the contest entry form to officially qualify for the grand prize. Only entries that have the completed phrase will qualify. You can either enter just the contest for the Yellow Team or you can enter all three contests.

Rules: Open internationally. You must be 16 years old or have your parent/guardian’s permission to enter. To be eligible for the grand prize, you must submit the completed entry form by April 1st, at noon Pacific Time. Entries sent without the correct puzzle code or without contact information will not be considered.

Angela Corbett graduated from Westminster College with a double major in communication and sociology. She started working as a reporter for her local newspaper when she was sixteen and won awards for feature, news, and editorial writing. She has also done freelance writing. In addition to writing, she works as a director of communications and marketing. She loves classic cars, traveling, and listening to U2. She lives in Utah with her extremely supportive husband and their five-pound Pomeranian, Pippin, whose following of fangirls could rival Justin Bieber’s.

A love so strong, even eternity can’t separate them.

Evie Starling has lived a relatively uneventful life hanging out with friends, gossiping about boys, and driving her 1966 Mustang. All of that changes when she moves to Gunnison, Colorado, to start college and meets two mysterious men.

For centuries, Alex Night and Emil Stone have yearned for Evie—but they each have their own reasons for wanting to be with her. When both men claim to be her soul mate and tell her about an unbelievable past, Evie learns that she’s not the person she thought she was. Soon, Evie finds herself in the middle of an age-old battle between the Amaranthine Society—the soul protectors, and the Daevos Resistance—the soul destroyers. With a past she doesn’t understand, and a future rife with danger, Evie has to decide who she can trust. But Alex and Emil aren’t the only ones who want Evie, and her soul is about to become the rope in an eternal tug-of-war.

More fun tidbits for you to learn about Angela Corbett:

My very own UNLEASHED Contest! 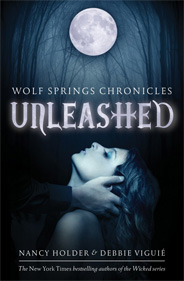 In addition to the YA Scavenger Hunt contest, I’m also running my own contest. Enter here to win a copy of UNLEASHED and a signed bookplate. The entry with the most points wins! If there is a tie, those contestants will be entered into a random drawing to determine the winner. This contest is open internationally. If you are under 14 years old, please be sure to get your parent’s permission to enter.

How to get your points (one point per item, 6 total):

Ready to go to the next website on the YA Scavenger Hunt?

Thank you for participating. The YA Scavenger Hunt is now closed.

This entry was posted on Thursday, March 29th, 2012 at 12:00 pm. You can follow any responses to this entry through the RSS 2.0 feed. Both comments and pings are currently closed.