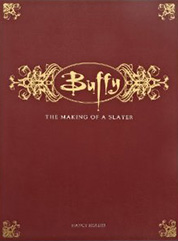 Buffy: Making of a Slayer (US Edition)

Celebrating the 15th anniversary of Joss Whedon’s Buffy the Vampire Slayer TV series, this lavishly produced book is the first authorized, fully illustrated retrospective of the hit show. Offering in-depth commentary on the making of the series, the book explores the characters and mythology of the Buffy universe and follows the evolution of all seven seasons. Die-hard Whedon fans will also find insider information on his involvement in other projects, including Angel, Firefly, and more. Housed in a foil-stamped slipcase, this volume features more than 120 images, including rare behind-the-scenes photos, sketches, props and memorabilia from the Twentieth Century Fox archives, along with stills from the most pivotal on-screen moments. Tucked in the inside cover of the case is an envelope holding “Slayer Lore: Texts and Magicks for the Battle.” These 13 removable pieces are replicas of the ancient spells and prophecies the characters used on-screen to defeat vampires, demons, and other monsters, making this the ultimate treasure-trove for every Buffy fan. 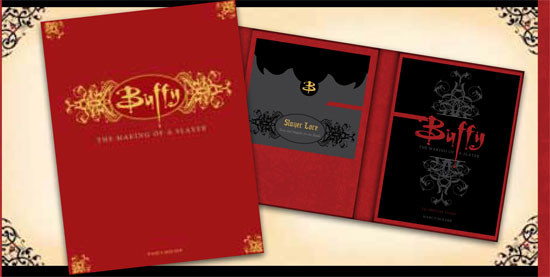