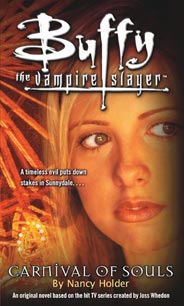 SOMETHING WICKED EVIL THIS WAY COMES.

There’s something troubling about Professor Caligari’s Traveling Carnival. Perhaps it’s that no one can recall the arrival of its hard-to-miss caravan of old-style wagons, countless performers, and horse-drawn carts. Maybe it’s the creepy calliope music that tirelessly beckons visitors. Let’s face it, an enigma that chooses Sunnydale nearly guarantees it’s up to more than wholesome family entertainment.

After a visit to the carnival’s Hall of Mirrors, a once-shy pair of homely sophomore twins parades the halls of Sunnydale High like diva supermodels on a runway. Intuiting the twins’ abrupt personality change as more than a self-confidence boost, Buffy — joined by Angel, Giles, and the rest of the Scoobies — decides to investigate the suspicious carnival firsthand. But soon it’s apparent that the price of admission is higher than she imagined. Those who enter the carnival’s attractions exit…changed. Each of the gang soon shows extreme displays of vice. Willow is wracked with envy. Cordelia’s greed consumes her. Xander unleashes his gluttony. Angel reveals a lusty new persona. And a dark anger rises in Giles. But it’s Buffy’s now-blinding pride that threatens to overpower her, and in the process destroy those she loves…. 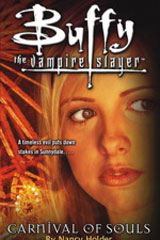