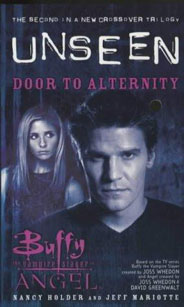 In Los Angeles, Angel and Buffy compare notes and realize that both are dealing with cases of missing teenagers — most of them children of the rich and powerful. Coincidence? They don’t think so. But when Buffy checks in with Giles, she learns that prime-time doomsday has hit Sunnydale, taking precedence over the gang warfare in L.A.

Back in her hometown, Buffy finds the doorway through which the monsters are gaining all-access passes to our universe. Renegade scientists have discovered how to open the portals from one reality to the next, which could explain where the teens are hidden. But when you’re operating near a hellmouth, opening dimensional portals is tricky business: you never know who — or what — you’re going to attract. With the lives of the kidnapped teens and one dangerously talented young woman at stake, Buffy and Angel join forces to do battle in the uncharted dimension….