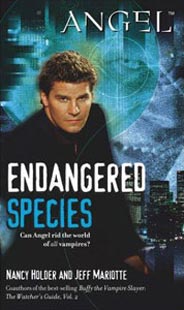 When a mysterious hunter asks for his help, a twist of fate offers Angel the chance to atone for his years of evil once and for all — but only at the cost of his own destruction. Courtesy of The Powers That Be, Cordelia Chase has grown used to her excruciatingly painful visions, but that doesn’t mean that they leave her unmoved. So when her latest vision shows her someone she knows, and not just another anonymous stranger, she finds it more than usually disturbing — especially since the subject of her vision is rogue slayer, Faith. Faith is in jail, but if the vision comes true, that could turn out to be the least of her problems…Then hunter Chaz Escobar shows up at Angel Investigations, asking for their help. He wants to track down his wife, Marianna — and she’s a vampire. Alone with her on a small and distant island, Escobar had been working to find a cure. Before he could succeed, however, she escaped him, and now he suspects that she is the creature stalking Faith. But Escobar has a hidden agenda, and before long Angel, Cordy, Wesley and Gunn discover that his real aim is to rid the world of vampires — all of them, forever; even those who possess a soul. If Angel is willing to sacrifice himself in order to help the hunter achieve his goal, then his atonement will truly be complete…