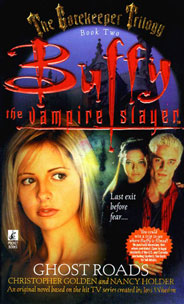 Buffy, Oz, and Angel are Europe-bound, only they’re not flying any airlines. They’re traveling limbo’s “”ghost roads”” in search of Jacques Regnier. Jacques is the sole heir of the dying Gatekeeper whose Boston mansion is the supernatural barrier restraining thousands of the world’s monsters. The evil Sons of Entropy will do anything to destroy the gate — even if it means trading the power-laden Spear of Longinus to the wicked vampires holding Jacques.

Back home, the ghost ship Flying Dutchman has set sail for Sunnydale, determined to shanghai new crewmen — dead or alive. For Willow, Xander, Cordelia, and Giles, it’s an ocean of trouble, especially when the monstrous Kraken reemerges with a vengeance.

But everyone’s assistance will be needed once Buffy locates Jacques, and uncovers the shocking plans the Sons of Entropy have already placed in motion — a plan that, if successful, will destroy the world and create a horrible new realm ruled by monsters.