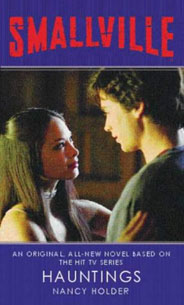 Based on the WB’s hit television series. Clark and Lana befriend a new student whose mother has just rented a farmhouse rumored to be haunted. The situation worsens as Smallville’s meteor rocks transform the restless unseen phantoms into deadly engines of vengeance. Can Clark’s powers fight the spirits of the dead? Original.