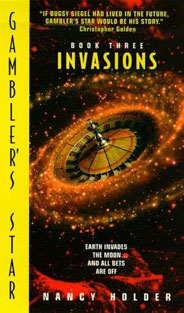 When the puritanical League of Decency outlawed gambling and other vices on Earth, Moonbase Vegas became just about the only place left to have a good time. The six Mafia families who ran the lunar casinos wanted to keep it that way. But then the world’s richest man, Hunter Castle, appeared in orbit around the moon and calmly announced his intention of muscling in on the action.

Nothing has been the same for Deuce McNamara since. Once a bagman for the lowly Borgioli clan, Deuce’s association with Hunter Castle has made him the Godfather of the Moon. But the job isn’t all it’s cracked up to be. Earth has declared war on the Moon. Deuce’s wife, the beautiful Sparkle de Lune, has betrayed him, leaving with Castle on a mysterious mission to the space of the alien !kth are planning an invasion…one only he can stop. Provided he lives that long when disgruntled Family members are out to get him at every turn. Dealt cards like these, most gamblers would fold. But not Deuce McNamara. Not when the stakes he’s playing for are the lives of his wife and children…and the fate of all mankind.