My Winter of Wonders

I have had the most amazing winter of my life (except for the first winter of my daughter’s life.) This is how it went:

December 26: Driving to Lodi to visit my sister and my brother-in-law. They are Jane Austen people, and they recently went to Bath, England, with six other people for ten days, during which they wore full Regency clothing (and we are talking all the different outfits from day dresses to gowns for the balls at the Assembly Rooms.) They went to the place where Downton Abbey is filmed, and I just saw Keira Knightley standing in the exact same Grecian temple with Mr. Darcy in Pride and Prejudice where my sister is waving to the camera in her sweet little day dress and bonnet.

After wonderful adventures in Lodi (the Serpentarium! the Firehouse Restaurant in Old Sacramento!) we blasted down the state to Disneyland/California Adventure and collapsed in the Embassy Suites just down the road. The next morning, which was New Year’s Eve day, we hustled in and rode the refurbished Indiana Jones ride and enjoyed many other splendors until our pet sitters had to leave for parties (and we wanted to avoid the crazy streets.) New Year’s Eve was very quiet, which was just fine with me.

On January 3rd, I flew to Maine to teach at my beloved Stonecoast MFA in Creative Writing Program. My stellar fourth-semester students went through the paces of doing their readings and giving their presentations while my YA workshop and I lunched with Megan Frazer Blakemore, who will be teaching at Stonecoast in the summer.

I left on January 9th to fly to New York City to attend the Baker Street Irregulars’ annual celebration of the birth of The Great Detective, Sherlock Holmes. I had heard of the Irregulars my entire life, and I was truly stunned to find myself among them. Erudite, literate, and friendly, the BSI’s took me under their wing as I made the rounds of the wonderful luncheons, lectures, and parties, meeting members of ASH (Adventuresses of Sherlock Holmes), the Baker Street Babes, and many more. I also ran into a cozy of mystery writers including Jan Burke and Dana Cameron (pix to come!)

I wish I could adequately explain how much this weekend meant to me. But in this instance, words fail me.

The Mystery Writers of America was having a weekend, too, and I saw many friends.

After the last cocktail party, I walked to Times Square to see if I could snag tickets for a play. The answer was yes, but I realized I was just too exhausted to go. So I went for a walk, passing the stage door for Annie, where lots of little girls were waiting with autograph books and moms in tow, down past some of my publishers, then over to Rockefeller Cener to watch the skaters. Then it was back to the Yale Club, where I was staying.

I crawled into bed and watched thrillers on TV (Debbie Viguie and I are currently writing a teen thriller!) and I just melted into mattress as I admire some of the Sherlock things I had for the Chumash (this is just a small sample: 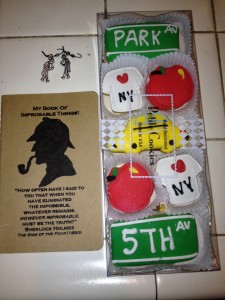 After the BSI weekend was over, I went to the Church of the Village (the United Methodist Church in Greenwich Village) with my friend, Karen. We went to Mission Hills UMC together here in San Diego until we both moved. Her pastor is Bishop J, who was starting a Bible study about Star Trek that very day. He brought in this portrait: 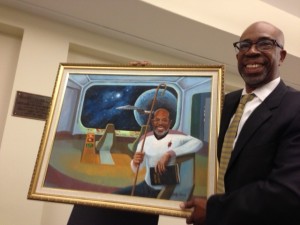 Bishop J. Shepherd on the Bridge!

And after all of that, I flew home.

And that has been my amazing winter…so far.

This entry was posted on Sunday, January 20th, 2013 at 3:51 am. You can follow any responses to this entry through the RSS 2.0 feed. Both comments and pings are currently closed.