You are invited to a fun filled, pre-Halloween event! Please join me and Kiersten White, author of Paranormalcy, on Friday, October 29th at Mysterious Galaxy. If you want to come in costume, that would be fantstic. I’ll be wearing Halloween themed street clothes. 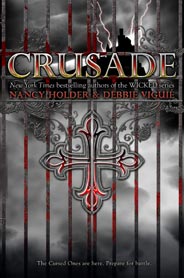 “Spend an otherworldly evening celebrating All Hallow’s Eve a bit early on Friday, October 29, at 7:00 PM with Mysterious Galaxy and two local authors of paranormal young adult fiction. Longtime favorite and bestselling author Nancy Holder will be discussing the world of Crusade, a world where vampires have come out of the shadows, and The Cursed Ones are laying siege to humanity, with only a few who can stand against them. Nancy will also discuss her Possessions series, as well as update fans on Wicked coming to television.

Debut local author Kiersten White received a starred review for Paranormalcy in Publishers Weekly, which favorably compared the novel to Joss Whedon’s Buffy the Vampire Slayer. Like Crusade’s Jenn, sixteen year old Evie lives in a world where supernatural creatures abound, and she and the other members of her organization are tasked with keeping them under control. When Evie meets a shape-shifter who challenges what she’s been taught, she must reexamine her values.”

Kiersten and I are looking forward to seeing you there!

This entry was posted on Thursday, October 28th, 2010 at 1:00 am. You can follow any responses to this entry through the RSS 2.0 feed. Both comments and pings are currently closed.