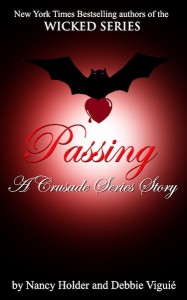 The vampires have declared war on humanity–and they have won. Now it’s New Year’s Eve in Salamanca, Spain–and the Academy’s graduating class of vampire hunters are taking their final exam–stake the Cursed Ones attacking in the fog, or die. Jenn has a fighting partner named Antonio de la Cruz…and he has a big secret…but Jenn’s got a secret, too, and it nearly takes them both out. “Passing” is the short story that launched the smash dark fantasy series, CRUSADE.

"The short story "Passing" was my favourite story from the vampire anthology The Eternal Kiss, so I was delighted to learn that "Passing" was going to be expanded from a little peek into a world to a full series." - Catherine Haines, On the Nightstand

"In this short story/prequel to Crusade, you can expect to see the beginnings of the romance between Jen and the gorgeous Antonio and the beginnings of a wonderful world you'd die to be part of. If I hadn't already read (and absolutely loved) Crusade, then Passing certainly did it's job at convincing me to pick it up!" - Wendy V, Cupcake and a Latte

"As the novella/lead in to their new Crusade series, Nancy Holder and Debbie Viguie have given us a fleeting yet very intriguing look at what is to come. The brief glimpse we see of each character is enough to ignite immense curiosity." - Marissa, Novels on the Run