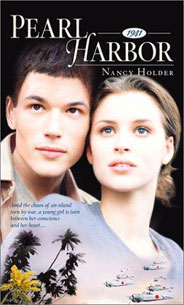 When 20-year-old Bekah Martin completes her nurse’s training in San Francisco, her aunt begs her not to return to her sheltered life on the Hawaiian Islands. Aunt Miriam insists that the Territory of Hawaii will look very different after all she’s seen on the mainland.

What her aunt does not realize is that Bekah had come to California not to seek adventure, but refuge from the tragic fire that had claimed the life of David MacLaughlin — her fiancé. Bekah now plans to return home and marry David’s twin brother, Ian, who shares David’s last name but none of his independence.

On the journey home she encounters Scott DeAngelo, a brash New Yorker and naval ensign. Scott is pushy, opinionated, and overwhelming, and Bekah steels herself against the undeniable attraction that develops between them. That is, until the morning of December 7, when a surprise attack on American warships takes the island by storm, and Bekah is forced to choose between her sense of responsibility and her love for Scott..