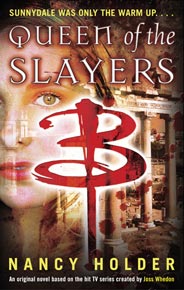 Queen of the Slayers

No vacation. No benefits. And the only retirement is an early death.

With the closing of the Hellmouth and the awakening of hundreds of potential slayers, Buffy Summers thought she had overturned the Slayer’s self-sacrifice and earned herself a much-deserved break. But the thrill of victory is short-lived. The Forces of Darkness are not ones to graciously accept defeat, and the collective rage unites disparate and powerful parties more eager than ever to reclaim dominance.

Willow’s magickal distribution of the slayer essence left girls across the world discovering their latent power. Giles races to reorganize the now much-needed Watchers Council, and the Scoobies relocate to Europe. And there in Rome, Buffy is drawn to the Immortal — a charismatic, if inscrutable, figure. But then comes word that a number of the fresh slayers are being coerced to join an army of slayers — governed by the mysterious “”Queen of the Slayers,”” an awesome evil determined to claim the intoxicating slayer essence for herself.

Xander is sent to Africa to learn more about the origin of the slayer essence. Instead, he returns to report that, alarmingly, there’s not enough good in the world to counteract the overabundance of evil, and that the deciding apocalypse is drawing much too near. Alliances are formed and loyalties betrayed as it comes down to slayer versus slayer, leading to an ultimate battle of champions — from Buffy’s past and present. And then an unimaginable gift arrives…