Reviews: Praise for The Evil Within

FROM THE PRESS & TRADES: 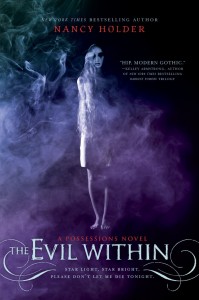 VOYA – June 1, 2010 issue
The Evil Within: “This eerie, chilling tale is unusually well-written and hits its mark. The characters are alternately sympathetic and scary, and the two sets of love triangles between Troy, Mandy, and Lindsay, as well as the ghostly David, Belle, and Celia, deepen the depth and layers of this tale. The topic is timely and popular; teens will line up for it as a pleasure read.” –Ava Ehde

The Sacramento Book Review – June, 30, 2010
The Evil Within: “Real teen problems abound in the upper-class setting of a private boarding school in Northern California, including troubles with alcohol, sex, peer pressure, and bullying, with the added element of spirits bent on revenge taking over the bodies of students. Lindsay returns to Marlwood to face her fears and lay the ghosts to rest – literally. She’ll learn that sometimes enemies aren’t always what they seem, and that sometimes, it’s the voices in your head that want you dead. Nancy Holder, a popular voice in young adult fiction and winner of the Bram Stoker Award for superior achievement in horror writing, has a great voice for teen fiction that will interest “teens” of all ages. – Axie Barclay

The Sea of Pages – 5 Stars
The Evil Within: “I could barely put the book down once I picked it up. I haven’t even read the first Possessions Novel and I was still thoroughly engrossed. Nancy Holder has a fascinating way of writing that draws you into a story right from the start. The main character Lindsay’s struggle to understand all of the past circumstances that are now shaping her life was completely unpredictable. Just as soon as I thought I had it all figured out, things would change. I enjoyed the other characters and how there ended up being more to them than I had originally expected–even the ghosts.” – Arya

The YA Book Queen – 4.5 Stars
The Evil Within: “The Evil Within brings in new twists and turns that will surprise you to no end, and leave you anxious for the next installment. Holder brings the same eerie feel to The Evil Within that she brought to Possessions. She’s a master of suspense, and knows just how to keep a reader hooked. Once again, she managed to surprise me by the end, and give me enough incentive to stay curious for the next novel.” – Lea

Elegantly Bound Books – 4 Hearts
“Here’s the lowdown.  Former reformatory house for wayward girls where secret lobotomies were performed turned into a boarding high school for girls and it’s pretty much in the middle of nowhere, two hours from any kind of civilization.  Some really creepy abandoned buildings, wooded area all around them, statues that may or may not move, ghost possession, a boys boarding school across the way, a love triangle and mean girls.  What’s not to love?” – Crystal

My Overstuffed Bookshelf – 4 Stars
The Evil Within: “The book was written very well.  It moved at the perfect pace and the author brought to life the character of Lindsay.  She seemed to go through the correct emotions in the right spots of the story.  It had an eerie feel to it that gave the right amount of suspense at just the right times. Having read this book, I immediately put the first book on my wishlist. I want to know what started everything in the series and I can’t wait to find out what happens next! A new to me author that I am glad I got to read!” – Amy J.

The Hate-Mongering Tart – Cuteness: 1 Puppy; Creepitude: 5 Linda Blairs
The Evil Within: “The sequel to POSSESSIONS is even more skin-crawly than the book that introduced Lindsay Cavenaugh, not-so-cool scholarship student, and Mandy Winters, the filthy-rich queen bee ruling not only Marlwood Academy’s popular crowd but also said crowd’s forays into the occult.  Lindsay never wanted to go back to Marlwood after winter break.  Even though Troy, from the all-boys school next door, seemed so over Mandy, his former flame.  But it’s not long before Lindsay realizes she doesn’t have a choice.  The ghost of Celia, a girl who died in a fire at the original Marlwood — a Marlwood with a seedy history, to say the least — is digging her way into Lindsay’s psyche.  And, according to Celia, she’s not going anywhere until Lindays sets things straight back at school.  THE EVIL WITHIN is nail-bitingly intense, too scary to read alone in the dark, and a book sure to be passed around the same groups of girls who read POSSESSIONS last fall and have been clamoring for a sequel ever since.   If you haven’t started this series yet, well, you know you want to!” – E. Kristin Anderson

Mindful Musings – 3 Hearts
The Evil Within: “The Evil Within started where Book 1, Possessions, left off. For those of you who’ve read Possessions, you’ll know what I’m talking about when I say that Book 1 ended with one heck of a cliffhanger. As such, I had a lot of unanswered questions. Because of this (and because The Evil Within was the second book in the series), I was able to get into the plot rather quickly, which resolved one of the problems I had with Possessions. Overall, The Evil Within was definitely a thrilling addition to the Possessions series. I’ll be keeping an eye out for Book 3!” – Natalie

VIEW THE EVIL WITHIN BOOK TRAILER