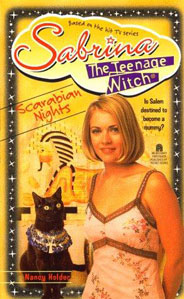 After a magical vacation to the Egyptian pyramids, Aunt Vesta brings Sabrina a super souvenir. The ancient charm is suppose to help the teenage witch with her cat chores, but instead it transports Sabrina, Salem, and Valerie back in time to ancient Egypt!

Salem is thrilled. After all, the Egyptians really knew how to treat their feline friends — they worshiped them as gods. But when the Cat Goddess Bast falls hard for the fast-talking black cat, she puts him under a love spell and locks his traveling companions in the maze of the Great Pyramid. As Sabrina and Valerie wind their way through the life-sized puzzle, they enlist the help of some magical figures — and a handsome young pharaoh on hiatus from his sarcophagus. But can they bring Salem to his senses before Bast morphs him into a mummy.