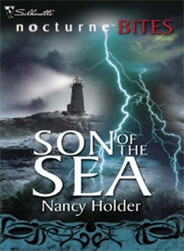 Son of the Sea

Nia Diakos has an ordinary life running her restaurant, taking care of her little sister. Suddenly her restaurant is attacked, her little sister kidnapped, and Nia is catapulted into a colossal war between the forces of good and evil among an ancient race of magicians known as The Gifted. And that’s only the beginning!

Racing to retrieve the powerfully magical Jar of Naxos from the depths of the North Sea before the evil opposition finds it, Nia is paired with Erik, a merman chieftan, whose icy demeanor reflects a century of bitterness and grief. Despite the fierce attraction between them, Erik is guarded and cold. But as the two unite to defeat the evil enemy, Nia must be transformed into a mermaid in order to accomplish her mission and the only way to do that is to become Erik’s lover and conceive his child!