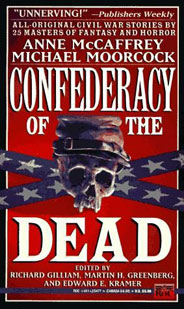 published in Confederacy of the Dead
Publication Date: June 1993

No other war has captured the hearts, minds and imaginations of Americans in the way the Civil War has. Now these 25 tales bring to life that troubled time when brave soldiers would heed the call to battle–even from beyond the grave. Includes a rare short story by Anne McCaffrey and four pieces that were nominated for the 1993 Bram Stoker Award.