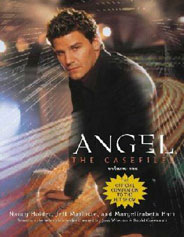 “Los Angeles. It’s a city like no other….People are drawn here. People, and other things. They come for all kinds of reasons. My reason? It started with a girl.”
— Angel, “City of”

For a hundred years, Angel offered an ugly death to everyone he met. And he did it with a song in his heart. A gypsy curse put a stop to his rampage, but his doomed love of Buffy the Vampire Slayer drove him from Sunnydale on his own quest for redemption.

Fortunately, he’s not alone. His support system includes Cordelia Chase, ex-May Queen (just until her inevitable stardom takes effect); Wesley Wyndam-Pryce, Rogue Demon Hunter; and Gunn (Charles Gunn, his name, not his street tag). Their rates are low, and their logo is indecipherable — but they save people, and stuff.