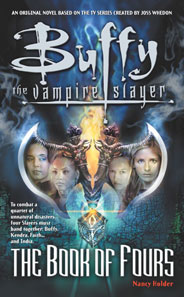 The Book of Fours

The ghosts of Slayers past come to Sunnydale in this latest novel based on the hit TV show and set during the show’s third season. Certain elements are out of whack in Sunnydale; hurricanes, flash floods, and fires plague the town. The Slayers, Buffy and Faith, as well as their friends, realize something supernatural is behind the natural disasters when mysterious axe-wielding figures appear amid the chaos. The spirits have been summoned by a powerful sorceress to kill the Slayers and feed their essence to the Gatherer, a being made up of pure evil. If the Gatherer manages to kill and feed on both Slayers, it will rise from the box in which it is imprisoned, leading to eternal chaos. In order to defeat the Gatherer, Buffy and Faith must call upon the ghosts of Kendra and India, two slain Slayers who encountered the Gatherer in their lifetimes. Full of the action and wit characteristic of the popular television series, The Book of Fours is sure to be a crowd pleaser.