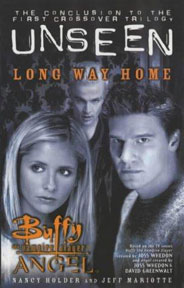 Buffy and Angel find themselves launched into a frightening reality where fierce dragons and other fairy-tale monstrosities rule supreme. Once they locate each other, they rally the missing teens — including Salma — and attempt to make their way through the interdimensional portal back to Sunnydale. Little do they know that two unlikely allies have also come through to alternity: Spike and the rogue Slayer, Faith, both with their own respective — and complicated — MOs.

Back in L.A., gang violence and vigilantism are at a fever pitch. The Slayerettes — now an extended unit — are holding down the fort, awaiting Buffy and Angel’s return. But Slayer and Vampire are feeling moral conflict that rivals the physical strain of demon-slaying: each wonders if a reality exists where their love could have survived. And when one of the duo’s charges is suddenly killed, the portal to Sunnydale is sealed. Now, before they can worry about ridding their own universe of supernatural chaos, they’ve got to find a way to get back to it….