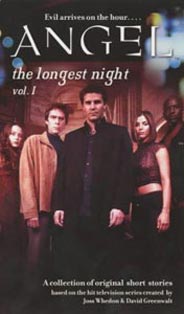 Hour by hour and evil by evil, this short story collection takes Angel and his colleagues one by one through one dramatic night. December 21 — the winter solstice. The time when the sun is at its weakest, and the longest night of the year. The undead equivalent of New Year’s Eve, it’s the night when those who live for the darkness all want to come out and party. Consequently it’s a VERY busy night indeed for Angel Investigations. There may be no rest for the wicked — but there’s certainly no rest for those who are sworn to protect the world against them. THE LONGEST NIGHT follows the individual trials of Angel, Cordelia, Wesley, Gunn and newcomer Fred as they battle to keep the forces of evil at bay.