“THE RULES is a blockbuster horror film waiting to be made”

I’m very excited to announce that Debbie Viguié and I have new teen thriller out! THE RULES has been getting stellar reviews!

From VOYA:
Robin, a high school junior, has been invited to the last scavenger hunt of the season. It was a surprise, as these extravagant events are usually reserved for the most popular students, but she decides she deserves some fun after the stress of the last few months. Little does she realize that this scavenger hunt is really a deathtrap for its participants. Originally setup by loner August as a means of humiliating those he feels have injured him or his sister, the game quickly becomes a deadly, as participants disappear or are found hanging with clues around their necks. The question is, is August still the game master or has someone else hijacked the hunt? And how can Robin and the others survive?
A good mystery, The Rules is a blockbuster horror film waiting to be made. It is not for the faint of heart, and some readers may avoid it at bedtime. That said, it is one of the really good horror stories. Stereotypical characters surprise the reader with their depth. As the viewpoint bounces among different characters, the reader will be pulled with the characters into suspecting first one, then another, increasing the mystery. Characters appear to have died, then show up injured or even unharmed. Weapons appear and disappear; buildings explode (great for the big screen makeover). This graphic story will find fans among horror aficionados, mystery fans, and those who enjoyed Heathers and other high school revenge tales.—Beth Karpas.

From KIRKUS:
Holder and Viguié keep the action churning along as they bounce from teen to teen for different perspectives on the action, sometimes recording a murder with appropriate gore, sometimes an escape. 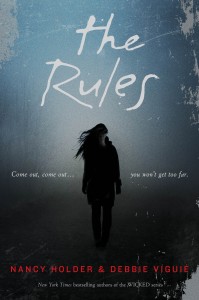 “The Rules is a must-read for fans of thrillers with truly frightening twists.”

“A twisty-turny, blood-soaked thrill ride, THE RULES is classic horror at its very best. I couldn’t put it down!”

“And from #1 New York Times bestselling author Kami Garcia (Beautiful Creatures):
The Rules follows all the rules of a truly creepy teen thriller: start out fast, keep the tension high, and kill great characters. Loved it!”

This entry was posted on Monday, June 22nd, 2015 at 8:15 am. You can follow any responses to this entry through the RSS 2.0 feed. Both comments and pings are currently closed.