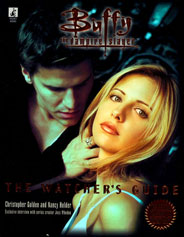 Here it is, the book that will tell you everything you want to know about seasons three and four of the popular television series, Buffy the Vampire Slayer. For the unfamiliar, the series, an extravaganza of supercomix proportions, owes its popularity to its quirky vision of teen problems (parent-child relationships, sexuality, drugs, outsiders, etc.) and its young “kick-butt” heroine, who copes with the familiar anxieties of growing up as she works to eradicate evil in her small town. Photos, cast profiles, interviews with stars and members of the production staff, dozens of quotes, and plot summaries–it’s all here for die-hard fans. Each episode gets full consideration, not only plot description but also detailed analysis of the show’s pop-cultural references, which add comedy and help leaven the violence. There’s also a whole section focusing on how an episode is put together. 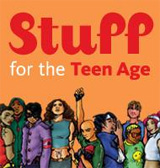 The Watcher’s Guide Volume 1 appeared in the 1999 edition of the New York Public Library’s Books for the Teen Age*, published in 1999.

*In 2009, Books for the Teen Age became Stuff for the Teen Age, a multimedia, multi-format, targeted, and teen-tested list of the best of the year in teen books, music, graphic novels, movies, games, and more.