The Whedonistas Table of Contents is Revealed!

My piece “Ramping Up for a Decade with Joss Whedon” will be published in Whedonistas, which will release on March 15, 2011. However, here is a sneak peak at the Table of Contents. The list is fabulous and I’m honored to be among them. 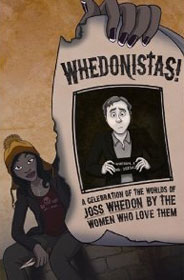 Whedonistas: A Celebration of the Worlds of Joss Whedon By The Women Who Love Them
Edited by Lynne M. Thomas and Deborah Stanish

In Whedonistas, a host of award-winning female writers and fans come together to celebrate the works of Joss Whedon (Buffy the Vampire Slayer, Angel, Firefly, Dollhouse, Doctor Horrible’s Sing-Along Blog). By discussing the impact of Whedon’s work, their involvement with his shows’ fandoms and why they adore the worlds he’s created, these essayists aim to misbehave in Whedon’s rich, fantastical worlds.

This entry was posted on Thursday, December 9th, 2010 at 10:12 am. You can follow any responses to this entry through the RSS 2.0 feed. Both comments and pings are currently closed.