The Zombies are Coming in Zombiesque!

My new short story “Zombie Zero” will be included in the new anthology ZOMBIESQUE, which will be released on February 1, 2011. Check out the very cool cover image and the other authors included in the anthology. 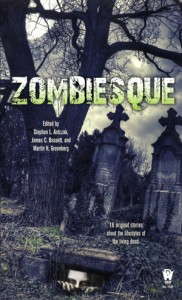 Zombies have long stalked and staggered through the darkest depths of human imagination, pandering to our fears about death and what lies beyond. But must zombies always be just shambling, brain-obsessed ghouls? If zombies actually maintained some level of personality and intelligence, what would they want more than anything? Could zombies integrate themselves into society? Could society accept zombies? What if a zombie fell in love?

These are just some of the questions explored in original stories that take readers from a tropical resort where visitors can become temporary zombies, to a new-made zombie determined to protect those he loves, to a cheerleader who won’t let death kick her off the team, to a zombie seeking revenge for the ancestors who died on an African slave ship. Here’s your chance to take a walk on the undead side in these unforgettable tales told from a zombie’s point of view….

This entry was posted on Friday, December 10th, 2010 at 10:59 am. You can follow any responses to this entry through the RSS 2.0 feed. Both comments and pings are currently closed.