I have a story coming out in a new anthology called Deep Cuts, which will be edited by E.S. Magill, Angel Leigh McCoy, and Chris Marrs. The anthology is in the beginning stages of being published and won’t be out for awhile. However, in order to pay its authors pro rates (yes, I’m one of the authors), they have started a Deep Cuts Kickstarter campaign in order to help raise the additional funds needed. 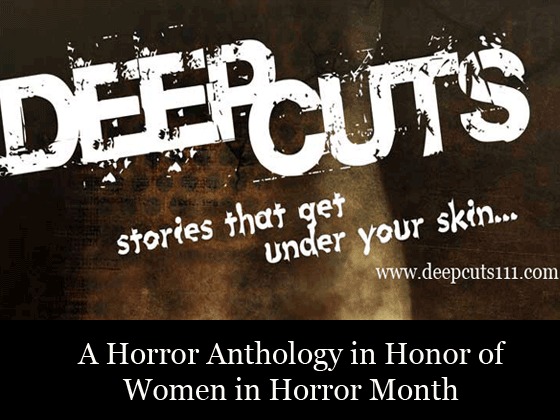 If you haven’t heard of Kickstarter, it’s basically an online market that brings together artists who submit their proposal for a project they are producing and buyers who are willing to pre-order the item(s) in order to generate money to help produce the product. The best thing about this is that it keeps the artistic control for each project in the hands of the artist.

Here’s a blurb from their Kickstarter page that I think expresses in a nutshell what Deep Cuts is all about:

Deep Cuts: (1) songs on an album that don’t get commercial air time. (2) great songs that get overshadowed by an album’s hits.

Like the “deep cuts” on an album, there’s good stuff out there, stuff worth digging up and having another go at. In honor of Women in Horror Month, we want to invite horror lovers (male and female alike) to write a great horror story in honor of Women in Horror month and recommend a powerhouse tale written by a woman, those bloody stylings and chainsaw rhythms that have lain hidden like deadly gems among other great works.

Join us as we knock the needle over a few grooves to find and recommend those deep cuts cranked up to 11 by women horror writers.

This entry was posted on Friday, June 29th, 2012 at 9:11 am. You can follow any responses to this entry through the RSS 2.0 feed. Both comments and pings are currently closed.