Rashomon is a famous Japanese film made in 1950.  Set in medieval Japan, it tells the story of an attack and a murder from four different points of view:  the woman who was attacked; her samurai husband, who was murdered (and speaks through a medium); the bandit who attacked the woman and murdered her husband; and a woodcutter, who was the only witness.

As each character tells the tale of the crime, the events change.  This is because each one sees the story differently.  According to the filmmaker, this change in perception alters “the truth” of a situation, and shows that there really is no such things as one truth.

I have always been fascinated by this “Rashomon Effect,” as it is called, and Debbie and I used it Crusade.  The vampires feel that they are telling the truth about who they are and what they need.  Readers can see the horrific circumstances that led to Aurora’s transformation, as well as Antonio’s—in both situations, their religious beliefs played a role.  But Antonio’s faith redeems him, while Aurora’s faith makes her bitter and vengeful. 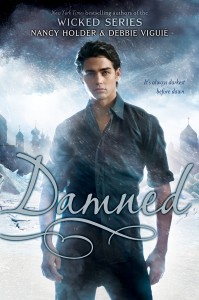 Police and other members of the criminal justice system now take for granted that eyewitnesses may “see” things based on their own biases and deeply held beliefs.  This has been used as the basis for episodes in TV shows as different as King of the Hill, Leverage, Star Trek: The Next Generation, and CSI.

In my series, Possessions, Lindsay, the heroine, is constantly questioning if what she’s seeing is real, or a result of a mental breakdown.  Other characters in the series perceive the things she’s seeing differently.  Which makes it harder for her to figure out who to trust.

Have you ever experienced the Rashomon Effect?  What happened?  How did you deal with it?

This entry was posted on Thursday, February 3rd, 2011 at 5:45 am. You can follow any responses to this entry through the RSS 2.0 feed. Both comments and pings are currently closed.